Google Chrome made its appearance today. The internet browser by the people that brought computing in the cloud to the masses brought great excitement to a slow post-holiday workday for me. Unfortunately, after eagerly downloading and running I was greeted by an application error. Once I clicked through that nonsense, I received a playful error message from the browser. 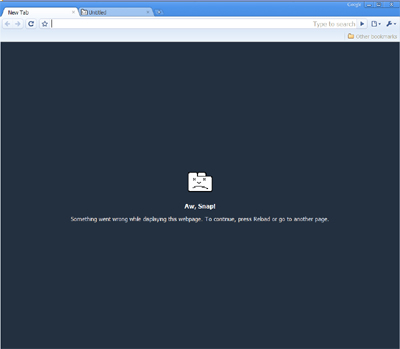 Is this an elaborate joke by Google to distract me from the constant tweets and links about anarchists in St. Paul?

This google release is just a beta release, but isn’t everything beta with google?

This week was spent chasing down issues with a VPN tunnel built between a SonicWall PRO3060 standard and a Cisco ASA 5550. The tunnels would build, but kept tearing themselves down. After scouring the net for any hints of help, I came up empty. Of course, SonicWall’s support gave their usual answer, “Upgrade the firmware.”

“Will that fix the problem?”

“I don’t know sir, but you should really be running on this firmware version.”

Every time I call, that is the answer. And this is level two support that I am calling.

This is the issue with going enterprise with a smaller company like SonicWall. Cisco, I’m sure, hasn’t spent a lot of time testing interoperability with SonicWall, and SonicWall’s knowledge base is non-existent.  Well, at least I can spend my three day weekend not worrying about it.

Here is a story about Major League Baseball’s new Network Operations Center, which will be the home base for all instant replay reviews. I guess it is time for MLB to join the other major sports leagues in replay, personally, I always thought that was part of the charm of the game-a homerun hits the top of the wall in right-center bounces back to the field and Justin Morneau is held to a double, Ron Gardenhire, red-faced, runs on to the field, argues with the umpire, throws his hat on the dirt, kicks the chalk line, heads for the showers. Then at work the next morning, I talk over the cube walls about how Morneau was robbed.

It’s not lost on me that I work, every day, with technology and I have an anti-technology stance on this. I am a complicated man.

But the most amazing part of this story, to me, as a network administrator, is that they were able to get 31 fiber circuits turned up in two months. Anybody that’s ever ordered a T1 or DS3 or whatever from a telco takes a while, especially when it’s fiber. I am  guessing MLB had some money and clout to throw around, maybe a call from a congressman got the ball rolling. Who knows.